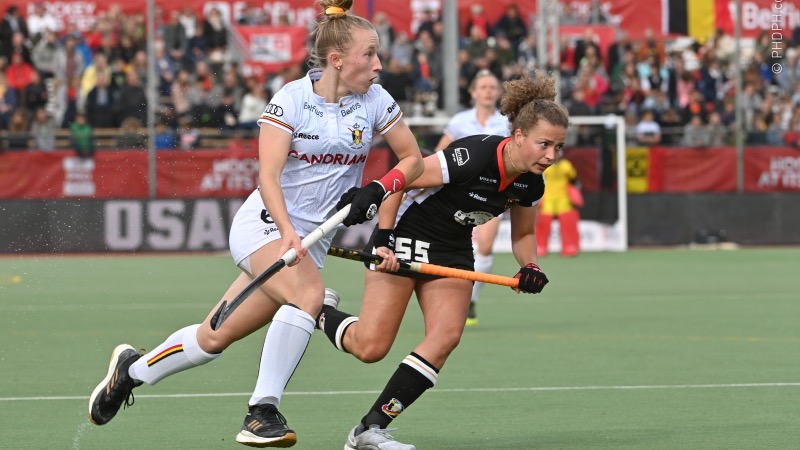 The third season of the Hockey Pro League started in October 2021 for both Belgian teams. The Red Panthers played the very first game of this new season on October 13 against the Netherlands - the reigning champions and world's number 1 - and lost 2-0 after a deserving and promising performance.

This was followed by a double header in Belgium against Germany for the Red Panthers and the Red Lions on October 16 and 17. It became an all Belgian week-end, with 1-0 and 3-1 wins for the Belgian women and 6-1 and 5-3 wins for the men. On November 10 the Panthers played a second game in the Netherlands, that was lost 3-1 this time, whilst the Lions played two games against the Netherlands at the end of the month, drawing 2-2 on November 26 (extra point for the Dutch after the shoot-outs) and losing 2-1 two days later. At their discharge, the Belgian were still in full decompression after their Olympic gold of the summer and the mountain of festivities and obligations that came with after their return in Belgium.

The FIH pro League season 21/22 will start again at the end of January and beginning of February in China, Spain and South Africa. Both Belgian teams will start the year in Argentina in the week-end of February 12.

The Red Panthers will play two games in the USA on May 14 and 15, before playing the rest of their games in Belgium (Antwerp): May 20 and 21 against Spain, June 7 and 8 against China, June 11 and 12 against India, before ending their season in and against England on June 18 and 19.

The Red Lions will play all their coming matches in Belgium (Antwerp), starting on May 20 and 21 against Spain, followed by France on May 28 and 29, South Africa on June 7 and 8 and India on June 11 and 12. As for the women, they will end with a double header in England on June 18 and 19.

For the Hockey Pro League games in Belgium will be the tickets will be available soon here.