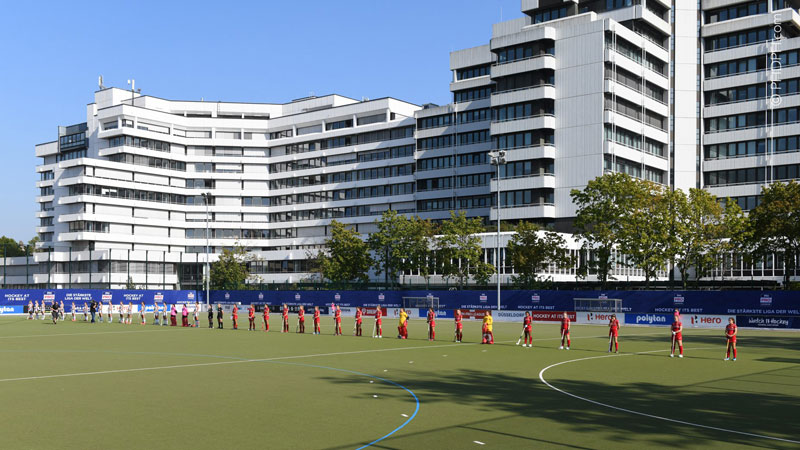 Due to the sanitary measures regarding the Covid-19 pandemic, the Royal Belgian Hockey Association has decided to organise the next three FIH Pro League game days of October 31st and November 1st and 4th in Uccle (Belgium) behind closed doors. This means no public will be allowed on the event site on game days.

Next on the FIH Hockey Pro League calendar of the Belgian Red Panthers and Red Lions, are the games against Great Britain (Oct. 31st & Nov. 1st) and the Netherlands (Nov. 4th). These six games (3 women & 3 men) will be organised at the hockey club of Royal Uccle Sport (Uccle - Brussels' region).

Due to the difficulties caused by the imposed sanitary measures in the fight against the propagation of the Covid-19 virus, the Belgian Federation and its event partner Sportizon/Golazo Sports have decided to organise these games without the presence of public. The maximum allowed number of spectators in Belgium is 400 at the moment and it's possible this number will even decrease in a near future.

Serge Pilet, CEO of Hockey Belgium: "In the actual context of a temporary stadium that needs to be built 'from scratch', and with the imposed distancing of 1,5 metres, this means we would need to build seated stands for at least 1200 people, of which we would only be allowed to sell 1/3 max. On top of this, we would need to spread the stands around the pitch, resulting in too many seats allowing bad visibility on the pitch. Therefore we prefer organising the games behind closed doors. We will now put our efforts in the enhancing of the TV coverage for all our Belgian fans."

Games broadcasted on open net by Play Sports
In Belgium, the public will be able to watch the BEL-GBR and BEL-NED games on Telenet Play Sports and on VOO Sport World. And good news for the Dutch speaking fans: Telenet has decided to broadcast the games on open net, instead of their pay TV net. We now hope VOO will be able to do the same for the French speaking part of the country.

Ticket holders will receive a voucher
People that already bought tickets for the initial postponed games of May 2020, will be contacted by the ticketing company. They will receive a voucher for the value of the bought tickets, that can be used when buying new tickets for the Pro League games of May 2021 (Belgian program in 2021).