Last week-end both Belgian national teams started the new FIH Hockey Pro League season in and against Australia. The very young Red Panthers played two very promising games against the Hockeyroos, n°2 of the world, earning them 3 points on a maximum of 6. In their 2 games against the Kookaburras, the Red Lions had two impressive performances and reclaimed the title of world's n°1 of their hosts.

Last Saturday, a strongly rejuvenated Belgian national women's team (average age 22) played its very first game of the new Hockey Pro League season in Sydney's Olympic Park against Australia. The Red Panthers created a surprise by leading 1-3 after 58 minutes. Unfortuantely the Hockeyroos managed to come back, forcing a shoot-out session earning them a bonus point. But 3-3 was definitely not a bad result against world's n°2. The Belgian team, ranked 12th, is in full reconstruction after the non-qualification for the Olympics.

24h later they stood in the same stadium for their second game against Australia. And again the Panthers managed to get a draw (1-1). They even won that extra point, beating the Australian women 3 to 1 in the shoot-outs.

On the men's side, the hockey fans had a mouth watering double header between the 1st (Australia) and the 2nd on the world ranking (Belgium) on the program. On Saturday the Red Lions displayed some dominating team play, creating a lot of chances but forgetting to kill the game. Led by 0-1 after 19 minutes, the Kookaburras managed to fight back in the 4th quarter, forcing Belgium to come back in extremis from 2-1 to 2-2. Thanks to a strong Vincent Vanasch in goal and very efficient strikers, the Belgian men won the subsequent shoot-out session, earning them an extra point. Thanks to this, the Red Lions also took over the 1st spot on the ranking from their opponents.

In the second game on Sunday, Belgium played at a very impressive level. The technical control and physical strength displayed by the Belgians, overpowered their Aussie hosts. This resulted in a very convincing 2-4 win forBelgium, consolidating the 1st spot on the FIH ranking. The 5 points earned by the Red Lions over the week-end, put them on top of the temporary standings, together with India and Germany.

Now, both Red Panthers and Red Lions continue their trip towards New Zealand, where they will play two games next week-end.

COME AND SEE YOUR RED PANTHERS AND LIONS IN BELGIUM!

The matches of the Pro League in Belgium are scheduled from May 15th to June 28th in Antwerp. You can find the program HERE. The tickets are already for sale online! 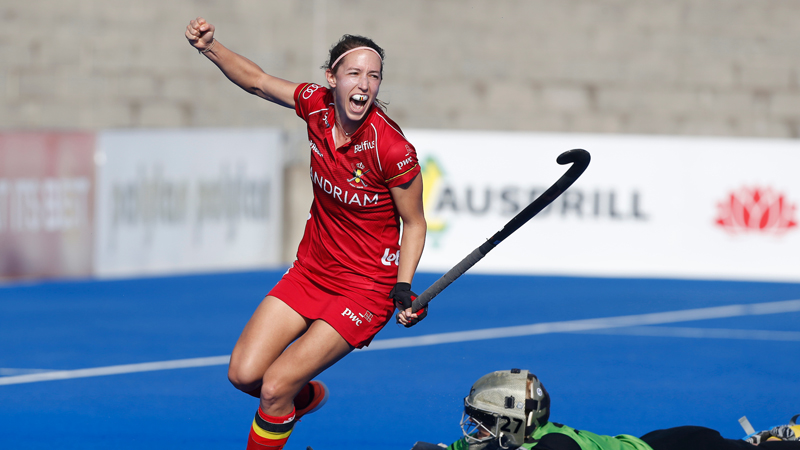